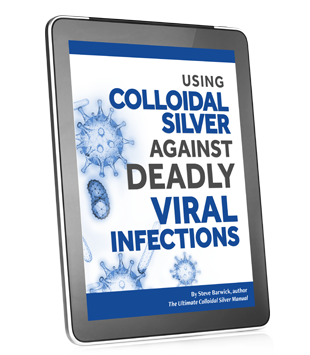 Inside, you’ll discover startling new medical research that reveals silver may well be your #1 defense against viruses.

Indeed, newer clinical laboratory research demonstrates that silver is so powerfully effective against viruses, it even stops the deadly HIV (i.e., the AIDs virus) from infecting human cells!

What's more, you'll come to understand why colloidal silver is your #1 best bet for all-natural, non-drug protection against potentially deadly viral agents including:

Here's just some of what you'll learn in this powerful and insightful (and potentially life-saving) e-book:

Make no mistake about it: Viral infections are always a threat, so I want you to have this report FAST.

That's why, the very minute we receive your order, you'll receive by email a download link to my brand new e-book so you can get started reading it immediately.

That way, you'll quickly know how to use colloidal silver against colds, flu, and many other viral infections!

What Others Say About Steve's Writing...

I’ve been waiting for a long time to see the day this vital and potentially life-saving information on colloidal silver would finally reach the general public. All I can say is that I’m glad someone finally had the guts to get the truth out to the people who need it the most. A great big ‘Thank You!’ to Steve Barwick.”

Steve literally wrote the book on colloidal silver and provides the best information that I have found on the subject.”

My good friend, Steve Barwick is a brilliant man, and I would venture to say that he is probably one of the most knowledgeable people I know on the uses and benefits of colloidal silver solutions. If you are interested in natural medicine and want to try an alternative to antibiotics and pharmaceutical drugs, check out his work!”

Thanks for all your brilliant work to educate people about colloidal silver. It is one of nature’s wonders that helps keep us well."

Steve, I’ve been a supporter of your work for nearly 15 years, and I have used Colloidal Silver for over 30 years without a single problem, EVER! I have cleared up feline herpes in a cat's eye, and have prevented infection from countless cuts, post surgery, for other injuries sustained during daily life. It is the safest and best antibiotic, anti-fungal, anti-viral that I have ever used, as opposed to the pricey, worthless, side effects loaded junk that the pharmaceutical companies promote. Read the labels for the antibiotics and other "medications" prescribed by physicians, in good, albeit ignorant, faith, and you will find horror abounding in devastating diseases that they can cause you, including death. So, if anyone has any doubt about using natural Colloidal Silver in place of chemicals, think again. This works, with zero side effects. Thank you for your excellent work in helping bring so much helpful information on colloidal silver to the forefront."

The very best information – bar none – on colloidal silver and its myriad of uses comes from the pen of Steve Barwick, author of The Ultimate Colloidal Silver Manual and many other books and articles on natural healing. He’s always the first resource I turn to when I want to know more about any aspect of colloidal silver usage. And because his work is so detailed, thoroughly documented and eye-opening, he’s generally the last resource I need to turn to, as well. I strongly urge anyone interested in colloidal silver and its numerous healing benefits to obtain all of the material you can from Steve Barwick. You’ll get the education of your life. His research into colloidal silver and its usage is astonishing. Best yet, he translates the medical and scientific mumbo-jumbo into plain layman’s language anyone can understand and put to use in their own lives.”

If you want to know more about colloidal silver and how to use it to keep your family healthy and infection-free, you need to obtain Steve Barwick’s work on the topic. If you’re new to colloidal silver, I suggest you start with his two 60-minute ‘how to’ videos. They’re inexpensive and chock full of helpful information that will blow your mind if you’re not already familiar with colloidal silver’s often astonishing healing benefits. If you want comprehensive and nearly encyclopedic knowledge of colloidal silver and its usage, get his ‘big book,’ The Ultimate Colloidal Silver Manual.” It’s pricey, compared to the videos. But you can see he’s poured his heart and soul into that book. It’s absolutely top-of-the-line information that’s invaluable to anyone interested in healing themselves or their loved ones with colloidal silver.”

Reading Steve Barwick’s books on colloidal silver and watching his videos is what initially got me and my entire family involved in colloidal silver usage. Now it’s an integral part of our normal daily lives, and I can’t see how I ever got along without the invaluable information he provides. But obviously, you can’t take advantage of something you don’t know exists, or don’t know how to utilize for its many benefits. So I thank Steve from the bottom of my heart for all of his efforts to educate people on safe, natural colloidal silver and its many healing uses. Because of his work, my family is healthier than they’ve ever been. And I’m a happier, healthier mom.”

Unfortunately, online there’s a plethora of conflicting information about colloidal silver. Everywhere you look you’ll find opinions, ideas and information that are at odds with each other. And that’s exactly why I’m so thrilled to have finally come across Steve Barwick excellent materials on colloidal silver and its usage. Barwick presents the available research in clear, easy-to-understand language even the most novice colloidal silver user like myself can understand. No big fifty-dollar words you have to open up a medical dictionary to understand. He also explains the conflicting information so that you know what to believe, what to ignore, and why. And he puts it all into perspective in terms of using colloidal silver responsibly and achieving maximum healing benefits from it. His work has been a Godsend for me and my family. I’m forever in his debt because my family is so much healthier and happier than we were before I came across the invaluable information he provides.”

I refer to Steve Barwick’s materials on the healing benefits of colloidal silver just about every time a family member gets sick with an infection. There’s really no substitute for this powerful and life-changing information. His books, tapes, videos, reports and other materials are money well spent, particularly if you value the health and well-being of your family, friends and loved ones.”

If I had never purchased your videos or read your book I would never have known about this wonderful healing elixir. The massive amount of energy I now receive from taking an ounce of colloidal silver a day has brought new life to this old 53 year old man! Thank you so much for your research and insights. I’m driving my friends crazy telling them about it!"

I've been reading his stuff for a long time...He's become quite a voice and a champion for disseminating good information about colloidal silver...silver therapeutics...silver medicinals...

He cuts through a lot of the garbage that the governmental and pharmaceutical complex uses to sway everybody from silver. He's one of my heroes out there...So hats off to you, Steve."

Who is Steve Barwick

Steve Barwick is a long-time natural health journalist and featured guest star of the 60-minute Colloidal Silver Secrets DVD, in which he’s interviewed on the topic of colloidal silver and its many healing uses by TV personality and Academy Awards Red Carpet host Kristyn Burrt.

Barwick is also author of recently updated The Ultimate Colloidal Silver Manual, which at over 540 pages is the most comprehensive guide to colloidal silver usage in the world today, and has been the world’s #1 best-selling book on colloidal silver and its uses for over 10 years.

Barwick is a long-time enthusiastic advocate of the responsible use of colloidal silver, and a strong proponent of taking personal responsibility for one's own health and well-being, particularly through proper nutrition and natural health. He sees this as a vital, but frequently overlooked component of the old-fashioned American ideal of self-determination and rugged individualism that helped make this country the greatest nation on the face of the earth.

Barwick has been a freelance writer since 1974, focusing primarily on natural health and nutrition topics, as well as on finance and politics. He is also the author, co-author, or editor of the following seven books:

Barwick has conducted over 13 years worth of intensive journalistic research into the healing benefits and extensive uses of colloidal silver – the world’s most powerful natural infection-fighting agent.

This research includes hundreds of hours interviewing over 2,000 experienced colloidal silver users worldwide, including doctors, nurses, naturopaths, dentists, scientists, researchers and regular folks alike, extracting from them the specific methods of colloidal silver usage that have worked best for them, for everything from simple infections, colds and the flu to far more serious internal infections and potentially life-threatening chronic degenerative diseases of all sorts!

Barwick has also spent hundreds of hours tracking down and meticulously sifting through old medical journals and reports from as far back as the early 1900’s written by some of the pioneering colloidal silver researchers.

What’s more, Barwick has spent well over a decade hunting down and pouring over the modern clinical research studies on the infection-fighting power of colloidal silver, and making his knowledge of colloidal silver and its usage available to others.

Here, Steve Barwick demonstrates how to inhale aerosolized colloidal silver into the lungs through a medical nebulizer, in order to help fight upper respiratory infections.

Barwick’s books and other material on colloidal silver usage are simply indispensible. They’re the only materials I own on natural health and healing that I won’t lend out, for fear of not getting them back. That’s how valuable they are to me.”

Steve Barwick is my all-time favorite natural health author. No hype. No nonsense. He just gets down to where the rubber meets the road, and gives you the information you need to get better. His work on colloidal silver, in my opinion, is some of the very best out there.”

If I hadn’t read your book I’d have never known colloidal silver could be used so successfully on skin cancer. I was able to heal a case of basal cell carcinoma on my right leg, thanks to all of the information you provide, which gave me the courage to try it. My doctor has now cancelled the electrodesiccation he ordered, when he saw how well the cancer was receding. The fiery inflamed skin is now back to normal again, and the cancer lesion is clearly in full retreat.”