Steve Barwick has been a natural health journalist for over 30 years, with hundreds of published articles to his credit. He began writing, editing and publishing books on natural health and survival in 1994.

For the past 13 years he has been an enthusiastic advocate of the responsible use of colloidal silver. He is also a strong proponent of taking personal responsibility for one's own health and well-being, particularly through proper nutrition and natural health. He sees this as a vital, but frequently overlooked component of the old-fashioned American ideal of self-determination and rugged individualism that helped make this country the greatest nation on the face of the earth.

Since 1974 Barwick's articles have appeared in a variety of local, regional and national publications including Grit, Boy's Life, Pacific magazine, Life & Health magazine, The Spotlight, American Free Press, Explore!, Health Science News, The American Sentinel, Vegetarian Times, the Desert Dispatch, the Christian Freedom Letter, Wealth Trends, the Orange County Register, the Bright Outlook, 50-Plus, The Bio-Tech News and many others. His articles have also been published on a variety of internet publishing forums and venues.

Frequently writing under the pen name of S. Spencer Jones (in honor of his birth father, the late Stanley Jones), he is also the publisher, author, co-author, or editor of the following five books:

Barwick is also the featured guest star of the recently released 60-minute Colloidal Silver Secrets video, in which he is thoroughly grilled by television personality Kristyn Burtt on the topic of colloidal silver and its usage. 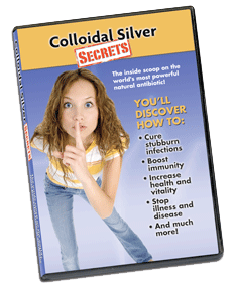 To learn how to get a copy of Steve Barwick's brand new 60-minute Colloidal Silver Secrets video (available in VHS or DVD) for only $19.95 (regularly priced at $59.95), call Life & Health Research Group, LLC at 1-888-846-9029 or shop online at lifeandhealthresearchgroup.com.

In the video, Barwick also demonstrates, step-by-step, how you can easily construct and use an emergency colloidal silver generator in under two minutes, using common household implements.

Throughout the video he also reveals many of the little-known secrets and tips of successful colloidal silver usage uncovered during the course of his 13 years worth of in-depth journalistic research during which time he interviewed over 2,000 experienced colloidal silver users including doctors, nurses, naturopaths, dentists, scientists, researchers and regular folks alike in the course of writing his new 547-page book, The Ultimate Colloidal Silver Manual.​

​The video is chock full of colloidal silver usage tips, little-known secrets for making high-quality colloidal silver in the comfort and privacy of your own home for less than 36 cents a quart (compared to the average price of $7 an ounce in health food stores), brand new information from the latest clinical studies on colloidal silver, and much more.

​Barwick's books, as well as the newly released Colloidal Silver Secrets Video, are sold through a variety of venues, including his own marketing and publishing company, Life & Health Research Group, LLC.

Barwick began making and using colloidal silver over thirteen years ago. He credits it, along with several other key nutritional supplements such as D-Ribose and Beta-Glucan, with helping him win a seventeen year struggle against chronic fatigue syndrome that began in 1977 and progressively worsened until he was introduced to colloidal silver in 1994.

He also credits colloidal silver with helping save his wife's toes from amputation after she contracted a severe bone infection in one of her feet that multiple courses of standard antibiotics were unable to stop.

Since that time, he has been enthusiastically chronicling in newsletters, books and online publications the astonishing rise in the popularity of colloidal silver throughout North America...the ensuing controversy that has erupted since the FDA first attempted to ban colloidal silver in 1997...and the recent moves by big business and industry to capitalize on the powerful antimicrobial qualities of silver by integrating it into a variety of household and industrial products such as band-aids, toothbrushes, telephone mouthpieces, sports clothing, foot wear, washing machines, kitchen appliances, bathroom countertops, hospital and laboratory contact surfaces, and even food processing equipment.

You can read more about Steve Barwick's journalistic endeavors in regards to colloidal silver at www.TheSilverEdge.com.

Barwick is the former owner of Silver Bullet Enterprises, a company which he ran from 1995 to 2001, and which became at that time, under his direction, the second largest colloidal silver generator distributorship in North America.

After seven years, he sold that company, and in 2003 he helped form The Silver Edge (a division of Silver Bullet Health & Nutritionals, Inc.), and has since that time helped turn it into the largest colloidal silver generator distributorship in the world.

For the past 27 years, Barwick has also been a respected direct mail copywriter and marketing consultant. He counts many of today's top natural health and alternative medicine publishers among his clients, as well as many top financial and political newsletter publishers.